Today was one of those idyllic days that travel is, in an ideal world, all about. Leaving Nannup and heading back towards civilization around 8am the sun was already beating hard enough through the windscreen that air con was needed and there was not an airplane trail, let alone a cloud, in the sky.

Sean markets this as the “tour for people who don’t do tours” and it certainly didn’t bear much resemblance to the coach and minibus tours I’ve previously been herded around on. Our group was just five (six is the maximum) and we all spent the day being driven around in Sean’s 4WD as if we were old friends of his. The beauty of this tour is that Sean knows all the right people in the area to get exclusive access to places not normally available to visit and we literally got to see things we couldn’t have seen on our own – certainly not in a hired 2WD anyway.

We start on the Margaret River itself, which, despite being the area’s namesake, is way down the list of attractions most people are here to see. Canoeing about three quarters of a kilometre out and back is a great introduction to the river – long enough to relax and get into the spirit of the tour but short enough not to be backache-inducing. The others in the group were two couples (one on honeymoon) and it’s easy to see why this is the main market for this tour – with the right person in the boat with you, this would be really romantic.

Heading on out to the coast, we grab coffee at Sea Gardens Café before watching the swell at Prevelly, aka Surfer’s Point. This beach has seen some of the biggest waves in the world over the past few years and Sean showed us unbelievable pictures of surfers riding them and told stories of friends returning to shore with dislocated hips and broken shoulder bones. 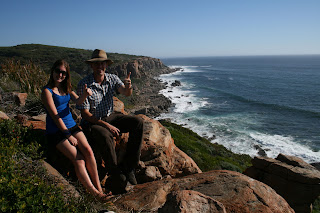 From here we head into the surrounding Leeuwin Naturaliste National Park, a protected area of sand dunes which is home to the permanent water source Ellens Brook and dreamtime site Meekadarabee Falls (more a trickle if we’re honest). We pause here to soak up the bush for a while and Sean points out jarrah, marri and karri trees, has us chew on a peppermint leaf and gives us a taste of three delicious local honeys. Talking about how the Aborigines lived off the land here for over 30,000 years and tasting some of the produce that comes from it makes me realize how abundant it really is – it might look like a scrubby wasteland but the truth is it’s far from barren out here.

To prove this even further we head for Fraser Gallop winery to taste some of their wines and have lunch in among the barrels of their shed. This is not something the general public can do and visiting a winery this way is far better than any cellar door experience – we get three whole bottles between us for a start. Both the whites (a sauvignon blanc semillon, or SBS, and a chardonnay) are lovely but the real treat here are the award-winning reds. We all want a glass of the cabernet merlot and as we finish up Sean produces a bottle of the cabernet sauvignon, which in its 2007 vintage won Best Bourdeaux Blend at the Decanter World Wine Awards. It’s so smooth, so velvety and so smoky that I could down the bottle but there’s one more place to visit: the Willyabrup cliffs, and it won’t pay to be tipsy as we walk along the coast.

Wandering along the path here (part of the long-distance Cape to Cape walking track) is the perfect end to the day. The views are spectacular under the still-dazzling blue sky, the wildflowers add splashes of vibrant colour to the scrubland under foot and off the coast the beady-eyed are rewarded with sightings of migrating whales blowing.

Unlike most tours, this one has been genuinely enlightening – as well as completely considerate of its surroundings. It’s been lovely to spend the day in a group too and it almost makes me sad to go back to the lonely open road tomorrow. Still, I reckon I’ll survive – I’m taking some Margaret River wines with me after all.
Posted by Unknown at 06:36